Whole grains should be a staple of any healthy, nutritious meal. Because of their increased fiber content, one benefit to whole grains is that they make a meal feel more filling so you stay full for longer. This is especially helpful to those of us trying to shed some extra winter weight. Many grains also come with increased vitamin and mineral content.

Some of my favorites include quinoa, barley, millet, oatmeal and wild rice. I typically purchase my grains bulk at Whole Foods as that is the least expensive option, but sometimes will resort to packaged grains if the bulk version is unavailable. I love how simple grains are to cook. Basically you put the grain in a pan with water and simmer. Its also great to cook extra for leftover or to add to another dish, such as soup or stir-fry.

Quinoa (pronounce Keen-wah) is my new favorite dinner grain, although technically quinoa is actually a relative of leafy green vegetables like Kale and Swiss chard. I usually just add some garlic and olive oil and have a quick and super nutricious side dish or meal base. Of course, there are tons of quinoa recipes out there. You can add veggies, herbs, nuts or fruit for breakfast. Pasta made from quinoa is also very delicious and available at most health food stores.

My new favorite quinoa dish was found on Vegan Yum Yum (Sweet Chili Lime Tofu w/ Wok Steamed Collards and Quinoa). I typically replace the collard greens with kale or asparagus, but even the quinoa from this recipe on its own is so delicious. I made the mistake of substituting ground cinnamon for the cinnamon stick. If you are going to do this, add the cinnamon when the dish is done, or better yet, just leave the cinnamon out.

The World's Healthiest Foods website has some great nutritional info on quinoa and all types of grains.
Posted by Melanie No comments:

It seems that our society is so fascinated with celebrities. Although I try not to put too much stock in what famous people do in their daily lives, I can totally understand the fascination, especially with musicians and other artists. Here is a brief but impressive list of some musicians I admire, who also just happen to be or have been vegetarians.


Let us begin now with the cow
The way it gets to your plate and how
The cow doesn't grow fast enough for man
So through his greed he makes a faster plan
He has drugs to make the cow grow quicker
Through the stress the cow gets sicker
Twenty-one different drugs are pumped
Into the cow in one big lump
So just before it dies, it cries
In the slaughterhouse full of germs and flies
Off with the head, they pack it, drain it, and cart it
And there it is, in your local supermarket
Red and bloody, a corpse, neatly packed
And you wonder about heart attacks?

There are so many other vegetarian musicians. Here are some rumored vegetarians that I haven't had a chance to 100% verify...

When I went food shopping yesterday I was happy to see Fiddleheads available once again! Although they weren't organic, they were local and I bought a nice big bag. I think I will either steam them and serve them with wild rice or pasta, or try the following recipe from Vegan Yum-Yum.

Pan-Fried Gnocchi with Morels and Fiddleheads


It is now truly spring for me! 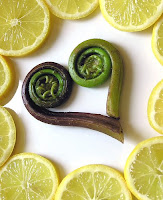 Posted by Melanie No comments:

Hello, and welcome to my vegetarian food and lifestyle guide. As a vegetarian, I am constantly searching for good, healthy veggie choices, not only in my local area, but wherever my travels take me. This blog will highlight some of my favorite local choices, interesting finds around the world, vegetarian related articles, and some great vegetarian recipes.

Please see my first post for more about my background.